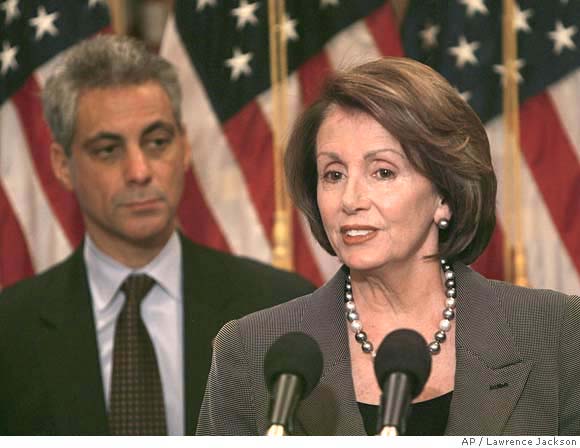 That House Speaker Nancy Pelosi has been a disappointing leader for House Democrats, few serious observers of the congressional condition will deny. But now, she appears to be something more troubling: a serious hindrance to the fight against the use of the crudest and most objectionable torture techniques.

Democrats and Republicans with a conscience have gotten a good deal of traction in recent months in their battle to identify the use by U.S. interrogators of waterboarding – a technique that simulates drowning in order to cause extreme mental distress to prisoners — as what it is: torture. Arizona Senator John McCain, a GOP presidential contender, has been particularly powerful in his denunciations of this barbarous endeavor. And Senate Intelligence Committee chair Jay Rockefeller, D-West Virginia, and key members of the Senate Judiciary Committee have effectively pressed the issue on a number of fronts.

Now, however, comes the news that Pelosi knew as early as 2002 that the U.S. was using waterboarding and other torture techniques and, far from objecting, appears to have cheered the tactics on.

The Washington Post reports that Pelosi, who was then a senior member of the House Intelligence Committee, was were informed by CIA officials at a secret briefing in September 2002, that waterboarding and other forms of torture were being used on suspected al-Queda operatives. That’s bad. Even worse is the revelation that Pelosi was apparently supportive of the initiative.

According to the news reports, Pelosi has no complaint about waterboarding during a closed-door session she attended with Florida Congressman Porter Goss, a Republican who would go on to head the Central Intelligence Agency, Kansas Republican Senator Pat Roberts and Florida Democratic Senator Bob Graham.

“The reaction in the room was not just approval, but encouragement,” recalls Goss.

How encouraging? It is reported that two of the legislators demanded to know if waterboarding and other methods that were being employed “were tough enough” forms of torture to produced the desired levels of mental anguish to force information from suspects who, under the Geneva Conventions and the U.S. Constitution, cannot be subjected to cruel or unusual punishment.

Was Pelosi one of the “tough-enough” cheerleaders for waterboarding? That is not clear, as the speaker has refused to comment directly regarding her knowledge of torture techniques and encouragement of their use. Another member of the House who is closely allied wit Pelosi did tell the Post, however, that the California Democrat attended the session, recalled that waterboarding was discussed, and “did not object” at the time to that particular torture technique.

If this is the case, Pelosi has provided aid and comfort to the Bush administration’s efforts to deviate not just from the standards set by international agreements regarding war crimes but from the provision of the Bill of Rights that establishes basic requirements with regard to the treatment of prisoners who in the custody of the United States.

Those deviations are precisely the sort of impeachable offenses that Pelosi has said are “off the table.” Her association with the administration on the matter of torture necessarily calls into question the speaker’s credibility on questions of how and when to hold the administration to account. It also begs a more mundane political question: At a point when Republicans like John McCain are earning points with their forthright stances against waterboarding, isn’t the credibility and the potential effectiveness of the House Democratic Caucus as an honest player in the debate profoundly harmed by the involvement of its leader in behind-the-scenes meetings that by all accounts encouraged the use of that technique?