ALL THESE WONDERFUL THINGS 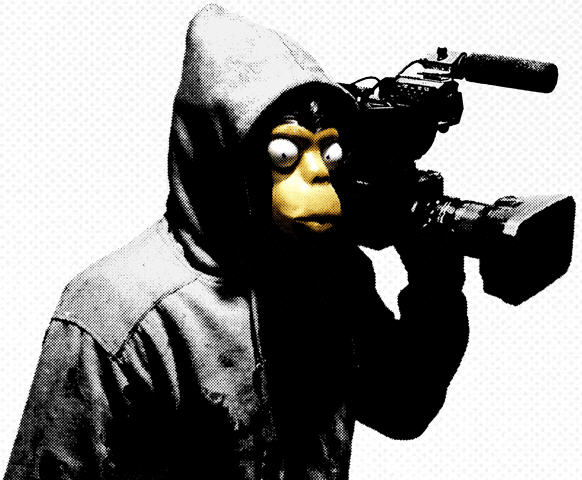 Whenever the subject of EXIT THROUGH THE GIFT SHOP has come up in casual or not-so-casual conversation over the past year, a vigorous discussion has followed. I’ve seen master filmmakers, newcomers, film critics and non-pros all engage in excited, lengthy dissections of the film – sometimes about what’s real, what they suspect is not – often about the film’s profound take on art and commerce. In the end, no matter what point of view the individual holds, the conclusion seems to always be that it’s a major work in the nonfiction canon.

One would be forgiven for not expecting all this when Sundance announced EXIT as a late addition to the 2010 festival. The debut film by Banksy – the anonymous British artist who gained notoriety and fame for his often-politically charged work that would turn up in some very unusual places (inside museum galleries, on the West Bank wall that separates Israelis and Palestinians) – EXIT would leave the festival spurring numerous distribution offers and go out on its own, working with sales agent John Sloss and distributor Richard Abramowitz to bring the film to theatres in the spring. And after a somewhat surprising (relief was more like it) inclusion on the Academy’s Documentary Feature shortlist, the film finds itself smack in the middle of Best-of-the-Year conversations. It’s nominated for the Documentary prize at the Film Independent Spirit Awards and it’s up for 6 awards at next months Cinema Eye Honors, including Outstanding Feature and Outstanding Debut, not to mention the numerous film critics prizes its been garnering (yesterday, it was announced as the Best Documentary and Best First Feature on indieWIRE’s annual critics poll).

Over the past month, we’ve had the opportunity to spend some time with the team behind EXIT – producer Jaimie D’Cruz and editor Chris King – including hosting the duo at a screening here in Los Angeles at Cinefamily earlier this month. In their presence, I witnessed numerous others trying to find out what Banksy thinks of this or that.

I had my own questions and Banksy and team were kind enough to get me his answers (via email, of course)…

All these wonderful things: One thing I’ve heard repeatedly from members of your team was that, early on, you were alone in your conviction that Thierry could and should be the narrative focus of the film – long before his show in LA that concludes the movie. What drew you to Thierry as a film character and, aside from the fact that he had a lot of archival material about street art at his fingertips, why did you think that he could sustain the film’s narrative arc?

Banksy: Thierry’s entertainment potential wasn’t difficult to spot – he actually walks into doors and falls down stairs. It was like hanging out with Groucho Marx but with funnier facial hair. Thierry arrived at a point when my world was becoming infested with hipsters and heavy irony, so his exuberant man-child innocence was fun to be around. Maybe I convinced myself Thierry was a good subject just because I liked him. I’d be lying if I told you the first time I met him I thought ‘this man’s life will deliver a good narrative arc’.

From the outset there are problems with any movie about graffiti because all the good artists refuse to show their face on camera. I needed the film to be fronted by a personality the audience could engage with. The producer Robert Evans said that ‘vulnerability’ is the most important quality in a movie star and that’s a hard thing to portray if all your interviewees have masks over their faces.

ATWT: It’s clear in the film that you rely on a team of people to create your artwork. What, if anything, was different about the filmmaking process, and the work you did with that team – Jaimie and Chris and others? And how did you know when you’d found the right collaborators?

B: I paint my own pictures but I get a lot of help building stuff and installing it. I have a great little team, but I tell you what – they all hate this fucking film. They don’t care if its effective, they feel very strongly that Mr Brainwash is undeserving of all the attention. Most street artists feel the same. This film has made me extremely unpopular in my community.

ATWT: When I saw the film, it didn’t strike me as anything but a true documentary. Perhaps because I live in Los Angeles and I’ve seen MBW’s art in my neighborhood and remember his big show, but also because it’s clear that the scene where Thierry meets Shepard Fairey is at least nine years old (there’s now a big movie theater complex across the street that doesn’t exist in the footage that Thierry shot). Yet, particularly when the film was opening last spring, there seemed to be this undercurrent of suspicion, perhaps because of the press’ desire to paint you as a prankster, that the film was trying to pull one over on us. How much of that conversation have you been paying attention to and what was your take on it?

B: Obviously the story is bizarre, that’s why I made a film about it, but I’m still shocked by the level of skepticism. I guess I have to accept that people think I’m full of shit. But I’m not clever enough to have invented Mr. Brainwash, even the most casual on-line research confirms that.

Ordinarily I wouldn’t mind if people believe me or not, but the film’s power comes from the fact it’s all 100% true. This is from the frontline, this is watching an art form self-combust in front of you. Told by the people involved. In real time. This is a very real film about what it means to ‘keep it real’.

Besides, if the movie was a carefully scripted prank you can be sure I would’ve given myself some better lines. I would’ve meticulously planned my spontaneous off-the-cuff remarks. I love that famous Jack Benny come-back to a heckler – “You wouldn’t say that if my writers were here.” But I’ve always wondered – did his writers tell him to say that?

ATWT: One of the more electrifying and sometimes terrifying moments for any filmmaker is seeing their work with an audience for the first time. Have you seen EXIT with an audience and, if so, what was that experience like?

B: Unfortunately I haven’t seen it with an audience. The nearest I got was going to the cinema to see ‘Precious’. They played my trailer beforehand and someone two rows in front shouted ‘OH MY GOD, BANKSY IS SUCH A SELL-OUT’ and I shrank into my seat.

ATWT: What do you think that you discovered about the form of documentary while making this movie and is there any correlation to your other artistic work? Were you a fan of documentary prior to making the film and, if so, what were some of your favorite films? Did any of them influence what you did on EXIT?

B: I’m from a generation for whom documentary isn’t a dirty word. It doesn’t have to mean endless shots of penguins set to classical music. Michael Moore and Morgan Spurlock seemed completely punk to me. And the most punk thing of all was they brought their story undiluted to the multiplex.

Documentaries have an important role in recording culture that’s unlikely to make it into the history books. DOGTOWN AND Z-BOYS was the Bill of Rights for skate culture. Having said that, my film was never going to be an authoritative history of street art. Or even an authoritative history of the selling-out of street art. We realized halfway through the edit that the ending needed to be as unresolved as possible. I’ve learnt from experience that a painting isn’t finished when you put down your brush – that’s when it starts. The public reaction is what supplies meaning and value. Art comes alive in the arguments you have about it. If we’ve done our job properly with EXIT, then the best part of the entire movie is the conversation in the car park afterwards.

ATWT: Do you think that there are specific challenges for you and your team due to your anonymity? Did that ever make the process easier or more difficult in a way that other documentary filmmakers may not suspect?

B: Deciding who to work with is a balancing act between people’s abilities, and their ability to keep their mouth shut. We’ve had some pretty sensitive footage of different artists go through our hands. Thankfully it’s all been burnt now.

My inability to go around schmoozing people might have hurt the film on one level, but on another level I’m a volatile drunk and it’s probably been an enormous blessing.

ATWT: The Toronto Film Critics recently named EXIT as the Best First Feature of 2010, which begs the question of whether there will be another film in the future – and, particularly for my own curiosity, would it be another documentary? If so, would you seek out a subject or would you wait for something to cross your path that ignited your desire to create a film about it?

B: The art I make is similar to film – my paintings are essentially freeze frames from movies that are playing in my head. I think its pretty clear that film is the pre-eminent art form of our age. If Michaelangelo or Leonardo Da Vinci were alive today they’d be making Avatar, not painting a chapel. Film is incredibly democratic and accessible, it’s probably the best option if you actually want to change the world, not just re-decorate it.