UPDATE AT THIS LINK: GOP consultant killed in plane crash was warned of sabotage 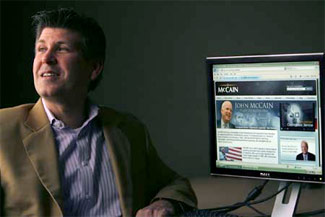 A top level Republican IT consultant who was set to testify in a case alleging GOP election tampering in Ohio died in a plane crash late Friday night.

“The plane was attempting to land around 6 p.m. Friday at Akron-Canton Airport when it crashed about three miles short of the runway,” reports the Akron Beacon Journal.

Connell’s exploits as a top GOP IT ‘guru’ have been well documented by RAW STORY’s investigative team.

The interest in Mike Connell stems from his association with a firm called GovTech, which he had spun off from his own New Media Communications under his wife Heather Connell’s name. GovTech was hired by Ohio Secretary of State Kenneth Blackwell to set up an official election website at election.sos.state.oh.us to presented the 2004 presidential returns as they came in.

Connell is a long-time GOP operative, whose New Media Communications provided web services for the Bush-Cheney ’04 campaign, the US Chamber of Commerce, the Republican National Committee and many Republican candidates. This in itself might have raised questions about his involvement in creating Ohio’s official state election website.

However, the alternative media group ePlubibus Media further discovered in November 2006 that election.sos.state.oh.us was hosted on the servers of a company in Chattanooga, TN called SmarTech, which also provided hosting for a long list of Republican Internet domains.

“Since early this decade, top Internet ‘gurus’ in Ohio have been coordinating web services with their GOP counterparts in Chattanooga, wiring up a major hub that in 2004, first served as a conduit for Ohio’s live election night results,” researchers at ePluribus Media wrote.

A few months after this revelation, when a scandal erupted surrounding the firing of US Attorneys for reasons of White House policy, other researchers found that the gwb43 domain used by members of the White House staff to evade freedom of information laws by sending emails outside of official White House channels was hosted on those same SmarTech servers.

Given that the Bush White House used SmarTech servers to send and receive email, the use of one of those servers in tabulating Ohio’s election returns has raised eyebrows. Ohio gave Bush the decisive margin in the Electoral College to secure his reelection in 2004.

IT expert Stephen Spoonamore says the SmartTech server could have functioned as a routing point for malicious activity and remains a weakness in electronic voting tabulation.

“…I have reason to believe that the alternate accounts were used to communicate with US Attorneys involved in political prosecutions, like that of Don Siegelman,” said RAW STORY’s Investigative News Editor, Larisa Alexandrovna, on her personal blog Saturday morning. “This is what I have been working on to prove for over a year. In fact, it was through following the Siegelman-Rove trail that I found evidence leading to Connell. That is how I became aware of him. Mike was getting ready to talk. He was frightened.

“He has flown his private plane for years without incident. I know he was going to DC last night, but I don’t know why. He apparently ran out of gas, something I find hard to believe. I am not saying that this was a hit nor am I resigned to this being simply an accident either. I am no expert on aviation and cannot provide an opinion on the matter. What I am saying, however, is that given the context, this event needs to be examined carefully.”

“Mr. Connell has confided that he was being threatened, something that his attorneys also told the judge in the Ohio election fraud case,” concluded Alexandrovna.

An FAA investigation into the causes of Connell’s plane crash is underway, but no results are expected for several weeks.

UPDATE AT THIS LINK: GOP consultant killed in plane crash was warned of sabotage