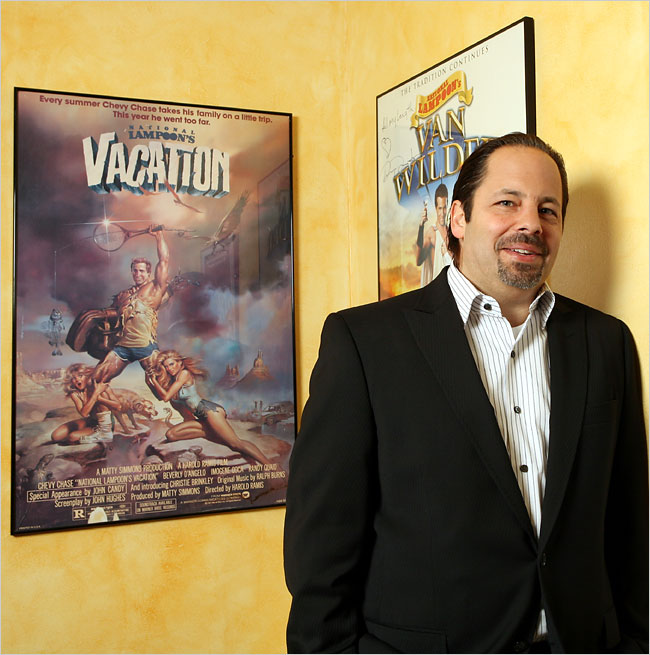 The chief executive of National Lampoon, Daniel S. Laikin, was charged on Monday with conspiracy and securities fraud in what prosecutors said was an attempt to raise the value of the company’s stock artificially.

The National Lampoon, a media company in Los Angeles with projects in feature films, television programming and interactive entertainment, owns interest in the movies “Animal House” and the “Vacation” series.

Mr. Laikin, who was arrested on Monday in Los Angeles, and five other defendants were indicted by a grand jury in Philadelphia.

Laurie Magid, acting United States attorney for the Eastern District of Pennsylvania, said in a statement, “These schemes were designed to corrupt the market and reap large profits for these defendants at the expense of the average investor.”

Mr. Laikin was accused of promising kickbacks to a stock promoter to raise the value of National Lampoon’s stock.

The investigation was conducted by the Philadelphia offices of the F.B.I., the Securities and Exchange Commission and the United States attorney.

Prosecutors said a seventh defendant, the stock promoter Eduardo Rodriguez, 49, of Livingston, N.J., enlisted other promoters to use insider information provided by the companies and drive up the share price of National Lampoon and two other companies, the Advatech Corporation of Florida, and Swedish Vegas of California. Richard J. Margulies, the chief financial officer of Advatech, is a defendant.

The stock buys were made from March to June and timed to the release of public announcements to avoid suspicion. But a witness in Pennsylvania, not part of the government but using F.B.I. funds, exposed the plan after pretending to cooperate in raising National Lampoon’s stock to $2.50 to $5 a share, from $1.87 in mid-March.

Mr. Laikin, 46, controls about 40 percent of the company’s 8.9 million outstanding shares. Had the plan succeeded, the value of his stake could have increased by up to $15 million, Ms. Magid said.

An assistant United States attorney, Derek A. Cohen, who with Louis D. Lappen will prosecute the case in Philadelphia, said Mr. Laikin was working out the terms of his release.

The S.E.C. also filed civil charges against the seven defendants. Daniel Hawke, director of the S.E.C.’s regional office in Philadelphia, said paying illicit kickbacks to arrange manipulative trades “is brazen misconduct and threatens to destroy any sense of fairness that investors expect in the financial markets.”

Mr. Hawke said that trading of National Lampoon shares was halted at 9:30 a.m. on Monday. Shares closed Friday at 73 cents on the American Stock Exchange.

David Gregory has been named moderator of NBC News’ “Meet the Press,” effective immediately. In addition, Betsy Fischer, the program’s longtime executive producer has extended her tenure with the top-rated broadcast. The announcements were made today by Steve Capus, President of NBC News. 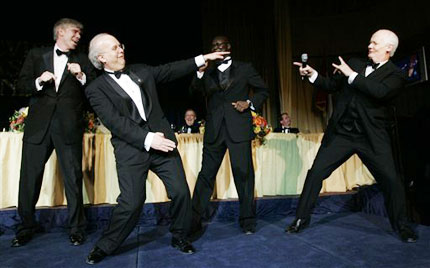 “For 61 years, this program has played a vital role in our nation’s political discourse and millions of Americans’ Sunday mornings,” said Capus. “We lost a legend this summer, and today we hand the program over to someone who has a true appreciation and respect for the ‘Meet the Press’ legacy, and a keen sense of what it needs to be in the future. David and Betsy are first-rate and I’m thrilled to have them in their roles at a key time in the program’s, and the country’s, history. I’d also like to thank Tom Brokaw, whose tremendous dedication has helped to lead ‘Meet the Press’ through this critical transition and extraordinary election season. He did so out of honor and respect for our friend Tim Russert, and we’ll always be grateful.”

“I’m honored and deeply humbled as I take on this role,” said Gregory. “I’m filled with a great sense of purpose as I join a superb team to cover Washington and the world from a treasured platform in our country. Above all, I want to make Tim proud.”

“It’s an exciting next chapter in the long history of ‘Meet the Press’ and I, along with the rest of the staff, am eagerly looking forward to this new era.” said Fischer. “Tim so often said one of the most important things for a good journalist to do is be prepared — and there is no doubt that David is prepared for this. Not only is he a huge talent, but his tremendous knowledge of Washington and his persistence for truth and accountability make him a natural fit to uphold the strong ideals of ‘Meet the Press.’”

“Meet the Press” has been the top-rated Sunday morning public affairs show for nearly 11 consecutive years. It’s the longest-running program ever on network television, premiering on NBC-TV on November 6, 1947. The show made its initial debut two years earlier – as a radio program with Martha Rountree and Lawrence Spivak as producers. Gregory is only the tenth person ever to be a permanent host of the program. He follows veteran NBC Newsman Tom Brokaw who served as interim moderator after the untimely death of Tim Russert on June 13, 2008.

In addition to his “Meet the Press” responsibilities, Gregory will be a regular contributor for “Today” and will continue to serve as a back-up anchor for the broadcast. He will also continue as a regular contributor and analyst on MSNBC, and lend his voice and reporting to all NBC News broadcasts including coverage of special events.

Gregory first joined NBC News in 1995. He served as White House Correspondent during the presidency of George W. Bush, reporting extensively on the 9-11 attacks as well as the wars in Afghanistan and Iraq. Gregory has also covered three presidential campaigns in 2000, 2004 and 2008.

Earning a reputation for being one of the toughest questioners of President Bush and his press secretaries, Washingtonian magazine named Gregory one of Washington’s 50 best and most influential journalists, labeling him the “firebrand in the front row.”

On the campaign trail in 2004, and during his years covering the White House Gregory was among the most heavily utilized network correspondent on television, according to the Tyndall Report.

Beyond politics, he has covered nearly every major story for the network: from the O.J. Simpson trials, to the trial of Oklahoma City bomber Timothy McVeigh, to the impeachment of President Clinton, and the death of Pope John Paul II.

Previously, Gregory worked as an NBC News correspondent based in Los Angeles and Chicago.  He began his journalism career at the age of 18 as a summer reporter for KGUN-TV in Tucson, Arizona.  Gregory also worked for NBC’s flagship West Coast affiliate KCRA-TV in Sacramento.

A native of Los Angeles, he graduated from American University in Washington, D.C. with a bachelor’s degree in International Studies.  In 2005, Gregory was named the School of International Service’s alumnus of the year and now sits on the Dean’s advisory council.

Gregory lives in Washington, D.C. with his wife Beth Wilkinson, an attorney, and their three children.

Betsy Fischer has been with “Meet the Press” for 17 years and has served as Executive Producer of the program since July 2002. Additionally, she served as Tom Brokaw’s producer for NBC News’ coverage of the 2008 Presidential Election, including the conventions, debates, and election night. Fischer served with Tim Russert in the same capacity during NBC’s coverage of Special Events, and throughout the 2000, 2004 and 2008 elections.

She has produced interviews with U.S. Presidents, key Cabinet officials, heads of state and every 2004 and 2008 presidential candidate. Fischer also created and produced an award winning series of special “Meet the Press” debates with the candidates from key 2002, 2004, 2006 and 2008 U.S. Senate races.

She has recently been awarded the honor of “Young Global Leader of the World 2008” by The World Economic Forum which recognizes 250 global young leaders for their professional accomplishments, their commitment to society and their potential to contribute to the shaping of the future world.

Further information on “Meet the Press,” including full bios and photos, will be available at www.mtp.msnbc.com and http://www.nbcumv.com/. 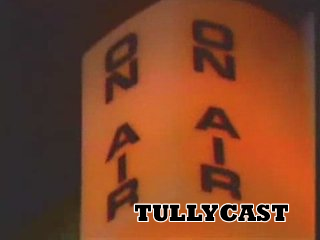 Tina Fey Excoriates Sarah Palin in V.P. Debate as the Bullshit Artist She Is

Some dialogue is taken from actual interview.Vodpod videos no longer available.

“Saturday Night Live” continues to go on a ratings tear, thanks in part to another appearance by Tina Fey as Sarah Palin and Chris Parnell as presidential debate moderator Jim Lehrer.

“SNL” was the highest-rated program of the night on broadcast TV.

The show averaged a 6.0 overnight rating/15 share in the metered markets, Nielsen Media Research said Sunday afternoon. That’s up 46 percent from the 4.1/10 of the previous season’s third telecast, on October 13, 2007. It also marks a ratings gain of 52 percent compared with the first three episodes of last season, which began later than “SNL” did this year.

It’s been a hot season so far for the show, which three weeks ago scored its best premiere since 2001.